Value of Charitable Gifting from an IRA Under the New Tax Law
6.22.18 | Financial Planning 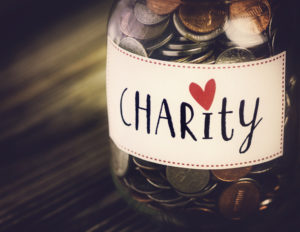 In late 2017, Congress passed the new tax law that contained numerous changes to the then existing law.  One provision that was not changed was the ability for individuals over age 70 ½ to make charitable donations directly from their IRA, also known as a “Qualified Charitable Distribution (QCD)”.

Due to the tax law changes, QCDs have potentially become more valuable.  The reason?  Starting in 2018, the standard deduction has doubled to $13,600 for single filers and $26,600 for married filers*.

If John and Sarah are over age 70 ½, they can make their donations directly from their IRA via a QCD (money goes directly from their IRA to the charity).  In this example, the $5,000 distribution from their IRA is not reported as a taxable distribution to them (lowering their adjusted gross income by $5,000).  They would still elect the standard deduction of $26,600 vs. itemized deductions of $17,000 ($10,000 of state income taxes, $7,000 of home mortgage, $0 charitable deduction since the QCD was excluded from their income), which would give them a taxable income of $68,400.  This strategy is estimated to save $600 in Federal taxes***.

An additional benefit of QCDs is that they count for purposes of satisfying Required Minimum Distributions (RMD).  You can read more about other potential benefits of a QCD in an earlier post here: http://www.verusfp.com/news-resources/2017/09/01/charitable-gifting-ira/.

As always, reach out to us if you would like to learn more about how a QCD may benefit your tax situation.

***This example assumes that all taxable income was taxed as ordinary income.

Our Disclosures · Site Built by COLAB